«« FREE SHIPPING ON ALL ORDERS WITHIN THE CONTINENTAL U.S. »»

Your shopping cart is empty.

Your shopping cart is empty.

What's Behind the Darkness? 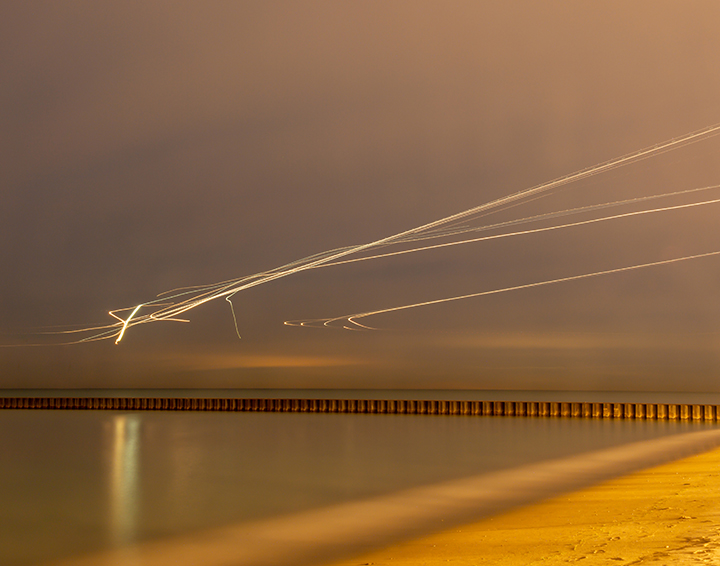 November’s photo, "Inbound Over South," is a time-lapse image, in which the shutter stays open longer than usual. It's a technique that records the passage of time in a single image. In this case, I left the shutter open for over 30 seconds. The result was these interesting streaks of light created by airplanes as they descended toward O’Hare over Evanston’s South Blvd. Beach.

I love to capture time-lapse images, especially at night, because they show what goes on behind a cloak of darkness. Taken at a normal shutter speed, this picture would be almost entirely black. The dots of light from the planes would be swallowed up in the darkness.

But with time-lapse, the moving planes and their flight paths reveal themselves. The shore becomes visible, and the gentle crashing waves blend into each other to form a soft white line parallel to the beach. The clouds soften with their relatively slow movement across the sky, and the immoveable groin becomes lit and in perfect focus.

The next time you're out in the dark, stop to consider what you're not seeing, and what's happening with the passage of time.

The presence of this badge signifies that this business has officially registered with the Art Storefronts Organization and has an established track record of selling art.

It also means that buyers can trust that they are buying from a legitimate business. Art sellers that conduct fraudulent activity or that receive numerous complaints from buyers will have this badge revoked. If you would like to file a complaint about this seller, please do so here.

The Art Storefronts Organization has verified that this business has provided a returns & exchanges policy for all art purchases.

This website provides a secure checkout with SSL encryption.

The Art Storefronts Organization has verified that this Art Seller has published information about the archival materials used to create their products in an effort to provide transparency to buyers.

SAVE 20% ON YOUR FIRST ORDER!
Sign up below and I'll email you a 20% OFF coupon right now!

Your cart is currently empty.

This is only visible to you because you are logged in and are authorized to manage this website. This message is not visible to other website visitors.

Below, select which favorite lists you would like to save this product into.

Enter your email below and we'll email you a 20% OFF Coupon right now!

This offer is valid for NEW CUSTOMERS only and excludes Limited Editions, Commissions, Gift Cards and Special Exhibit Works!